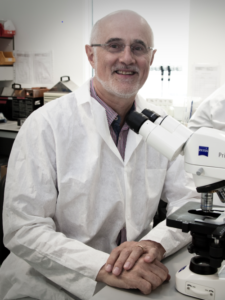 The British Society for Medical Myology (BSMM) has a long and distinguished history in the advancement of education and the promotion of research in all branches of medical and veterinary mycology over the last 69 years (www.bsmm.org), so it is a great honour to be elected to be its President. Prof Richardson follows an illustrious list of fellow medical mycologists who have served as President of BSMM since 1964.

Professor Malcolm Richardson built and ran the highly specialised mycology laboratories at the Mycology Reference Centre Manchester since its inception alongside the National Aspergillosis Centre at the Manchester University NHS FT in 2009 until his retirement in 2020, and still serves the centre as its Consultant Clinical Scientist in Medical Mycology. He has an extensive list of publications, positions and achievements – for more details click here.

Prof Richardson commented “I feel very honoured to be elected as President, having been a BSMM member for 50 years”, and it is particularly fitting that the Presidency comes to Manchester as the annual scientific meeting of the BSMM is to take place in the city in May 2023.