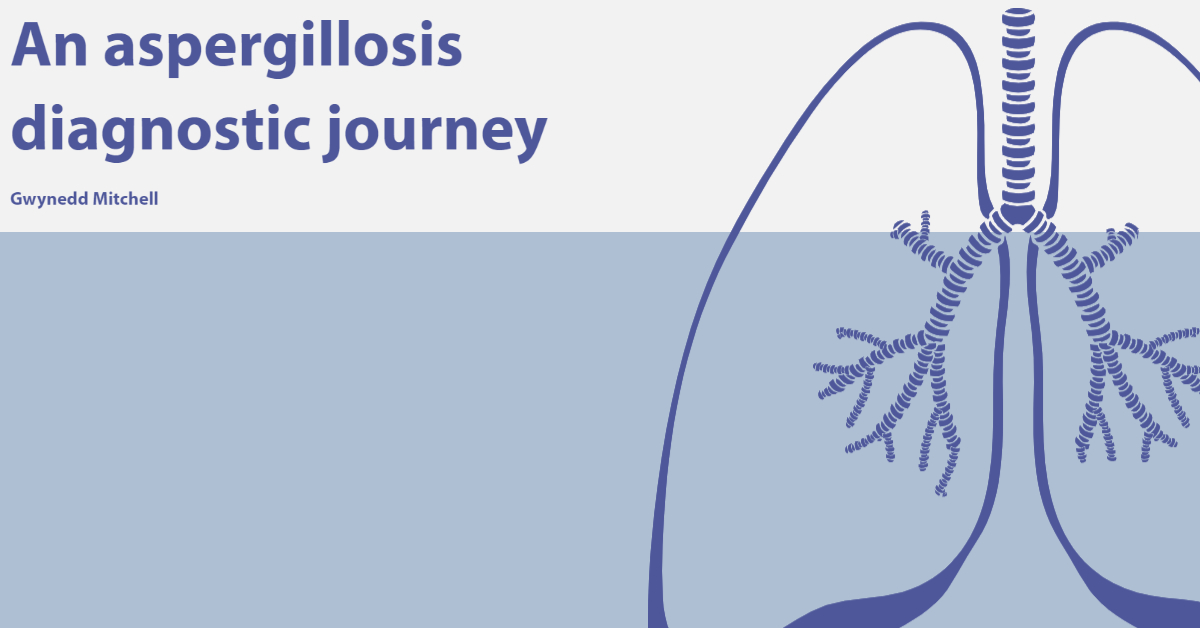 Aspergillosis is a rare and debilitating fungal infection that is caused by aspergillus mould. This mould is found in many places, including soil, rotting leaves, compost, dust, and damp buildings. There are several variants of the disease, mostly affecting the lungs, and diagnosis is difficult because symptoms are like those of other lung conditions.

Gwynedd Mitchell is 62. She has two adult children and lives with her husband in Wales. Gwynedd is no stranger to health problems; she has extensive allergies, has suffered breathing difficulties from six weeks old, and as a child, she was diagnosed with asthma and suffered frequent attacks. But in 2012, she was left shell shocked when she was diagnosed with three aspergillosis variants, allergic bronchopulmonary aspergillosis (ABPA), chronic pulmonary aspergillosis (CPA) and three aspergillomas (a ball of mould in the lungs).

This is her experience of the aspergillosis diagnostic journey.

Gwynedd first noticed a change in her usual asthma symptoms in 1992. Her asthma had always been poorly controlled, but she experienced periods of increased difficulty breathing, recurrent chest infections, and during one coughing episode, she noticed blood in her mucus.

“It was a small amount compared to what I have experienced in recent years, but it was my first experience of haemoptysis,” says Gwynedd.

Gwynedd made an appointment to see her GP, who put the bleeding down to excessive coughing. Although he later tested for Tuberculosis (TB), which she was negative for, her symptoms were not investigated further.

In 1998, after repeated GP visits, Gwynedd was referred to a specialist who diagnosed her with bronchiectasis and told her she was allergic to aspergillus.

Gwynedd recalls the diagnosis, “they just called it pigeon fancier’s lung (the most common form of hypersensitivity pneumonitis). I thought I don’t keep birds, so it’s fine. It’s an allergy that won’t affect me. Nobody explained what aspergillus was. They did not say it is a mould, and it is everywhere.”

After that initial diagnosis, Gwynedd continued the repeating cycle of chest infections, difficulty breathing, GP visits, and antibiotic and steroid prescriptions that had become normal. But her condition remained unimproved.

“For several years, I was back and forth to my GP with difficulty breathing, coughing up brown phlegm, haemoptysis and chest infections. Often, no more than 8-weeks would pass between visits. Mucus samples were often sent off, but they yielded no answers. I was not referred back to a specialist or given a repeat Xray,” says Gwynedd. “I felt my GP wasn’t listening to me when I was telling him how unwell I felt.”

In 2012, Gwynedd’s symptoms worsened further. Her chest wouldn’t settle, she was struggling to take a deep breath, she had developed back pain, and her usual medication wasn’t helping.

Following an emergency appointment with a locum GP, Gwynedd was sent straight to her local hospital, where an Xray showed shadowing on her lungs. After discharge, a follow-up CT demonstrated extensive lung disease and ‘masses’ on both lungs.

In the three months that followed, Gwynedd saw several specialists including an oncologist (aspergillosis is often mistaken for cancer), and underwent numerous tests before a diagnosis of aspergillosis was made.

On her first appointment with Professor David Denning at the National Aspergillosis Centre (NAC) in Manchester, the now-retired founder of the centre told Gwynedd that if her condition had continued undiagnosed, she would not have survived beyond five years.

“As you can imagine, I was incredibly upset. I had always believed that my chest would get me in the end – but in my late 70s or 80s. The thought of dying sooner was difficult to comprehend,” says Gwynedd.

Upon diagnosis of aspergillosis Gwynedd was started on a combination of immunotherapy and antifungal medication. However, due to the severity of her disease, it was only after an intensive three-month regimen of daily intravenous infusions of antifungal medication that Gwynedd felt an improvement, but it was marked when she did.

“I had, for as long as I can remember, always been aware of my lungs and the pain in them. But I recall being out on a walk one day and suddenly realising that I didn’t feel unwell and I didn’t have any pain. I felt like a normal person! I hadn’t realised how bad it had been for so long; I had just gotten used to it,” says Gwynedd.

It has been nine years since Gwynedd’s diagnosis, and she has, through advice from clinicians, support from fellow patients and her family, and some trial and error, learnt how to live with the disease. She has developed an understanding of what exacerbates her symptoms and what to avoid. This ‘know your enemy’ approach, coupled with an array of medication, allows her to remain active and in control of the disease. However, life is by no means normal.

“I avoid so many things; fallen leaves, wooded areas, old buildings, including National Trust properties, marquees (I have seen mould on the canvas walls of a marquee). I also avoid crowded places like theatres, cinemas and museums in their busy season,” says Gwynedd.

Despite limiting possible exposure to aspergillus mould, exacerbations still occur, and Gwynedd lives in fear that any deterioration will result in her treatment options running out; her infection is resistant to several antifungal medications and she suffers severe side-effects to others, issues that many patients experience which can severely limit treatment options. The need for earlier diagnosis is one reason why Gwynedd is so passionate about raising awareness of aspergillosis, so others suffering from the condition can get access to treatment sooner and delay disease progression.

“If you have a chronic lung condition, that is not being controlled with your medication, if you are experiencing repeated chest infections or any other persistent problems with your breathing – push for a referral to a specialist. Tell your GP you want it investigated. Don’t be scared to speak up. Early diagnosis is essential to prevent deterioration and improve quality of life,” says Gwynedd.

If you want to know more about aspergillosis, the symptoms and who is at risk, click here.

For more information on the National Aspergillosis Centre click here.