The National Pollen and Aerobiology Research Unit at the University of Worcester has produced a number of helpful calendars, showing the monthly spore count averages over a period of 5 years. They have also compiled useful information on the allergenicity of each spore type and where each mould prefers to grow. This allows those at risk to avoid areas where the spore concentration is potentially very high. The information for Aspergillus/Penicillium spp. is copied below: 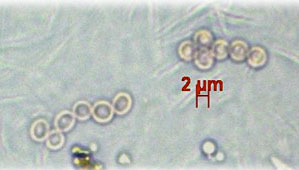 There are many species of Aspergillus and Penicillium, which live on a wide range of substrates. The spores can be very prevalent during the peak periods, triggering a range of respiratory problems. The spores are particularly prevalent in wooded areas, compost heaps, rotting wood chips and bark mulch. Some species rot down pine needles, so conifer plantations should be avoided during Autumn. Penicillium chrysogenum is found widely in nature, occurs on indoor substrates and is the type used to produce the antibiotic penicillin. N.B. Houseplants can be sources of spores, particularly Aspergillus/Penicillium types.  If you’re keen to have houseplants, only have cacti, which require dry conditions, and ensure the soil surface is covered in grit.

Aspergillus and Penicillium spores are present in the air throughout the year but the main peak periods are late August to October and January to February.

High for some types, particularly A. fumigatus and P. chrysogenum. A. fumigatus is a major cause of aspergillosis (farmer’s lung).